Ted Badgerow, Brewmeister with an Attitude 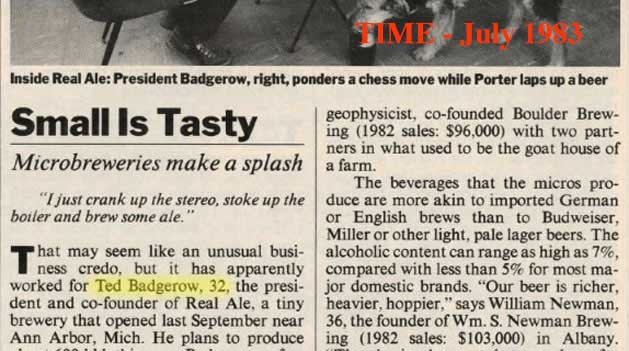 "My brewing epiphany came in 1979 in the midst of an annual solo bicycle ride from Muskegon to Ann Arbor, where my wife and I worked at the University of Michigan. A bit after noon on a hot summer day, I wheeled up to the house of my best friend and music partner Jim Rouse. "You look hot," Jim said. "Have a beer?"

I made quick work of a delicious brown beer and remarked, "You must have gotten a raise, you"re buying the imports now." "No," said Jim. "I brewed it myself."

That galvanizing moment was the genesis of my brewing career. Home-brewing had just been legalized in the United States. I was cooking professionally for forty hungry sisters at a U of M sorority and later supervised the University Club kitchen, so brewing seemed the next logical step. After numerous basement experiments people began to enjoy my homebrewed ales and suggested I start a brewery.

...we raised $12,000 from investors and formed Michigan's first modern craft brewery, The Real Ale Co. Inc... I'm proud to have been one of the first fermenters of the Great American Beer Revolution

So in partnership with longtime friend and former dairy farmer Gordon Averill, we raised $12,000 from investors and formed Michigan"s first modern craft brewery, The Real Ale Co. Inc., in the historic clock tower building in Chelsea MI. The brewery was licensed in 1982, one of 41 brewing companies that existed in the US at that time. The only other breweries in Michigan were Stroh"s and Frankenmuth.

The terms "craft beer" and "brewpub" and "microbrewery" were unknown at the time. Michigan brewers were not allowed to sell for consumption on the premises until the mid-1990"s, but we were allowed to give away free samples. At that time over 97% of the beer consumed by the American public was pale lager. A few imported – mostly European -- beers were available, but we were the only brewery in the Midwest selling real ales produced locally in small batches, and I'm proud to have been one of the first fermenters of the Great American Beer Revolution. As Michigan"s first new brewery in thirty-eight years, The Real Ale Company was featured in newspapers, on TV stations, in a Time Magazine article, and in the Brewers Digest. We sold as much beer as we could brew at $20 per case -- about $6 per case less than it cost to produce. When we ceased production in 1984, a young fellow named Larry Bell was so enamoured with brewing that he bought our brew kettle and started a tiny brewery in Kalamazoo. I returned to home brewing and eventually helped start the Ann Arbor Brewers Guild — an association of home brewers.

Since then, and with a faster pace more recently, the old American lager beer monoculture has been giving way to a vibrant community of over 4,000 breweries nationwide, producing every imaginable variety of fermented beverage. To me, the most striking features of our craft beer movement are the adventurous bursting of traditional beer boundaries and the remarkable spirit of cooperation, collaboration and collegiality shared by small brewers. Dozens of them have welcomed me into their brewhouses, shown me their facilities, answered my many questions, and shared some mighty fine brews. To them, Dave Roberts and I owe a debt of gratitude that can only be returned by serving you the finest locally produced beers we can possibly brew. That is Mishigama"s pledge to you."